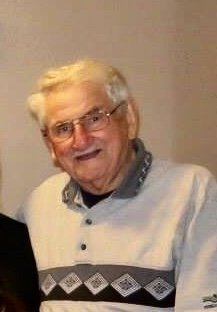 It is with sadness that we announce the passing of Basil Murphy on June 21, 2019. Basil was born July 28, 1928 to the late Mary (Charlton) and Cecil Murphy. He is survived by his sister Rosemary Beck (Murphy), many nieces and nephews, and his special friends Audrey Ross, and William and Mary Landry. Basil was predeceased by his parents, his sister Madelyn Manley (John Manley), brother Cecil (Elizabeth), sister Ruth (Bill Shea) and brother in law Doug Beck.

Bas attended Oxford School and then started his working years with Oxford Dairy in the 1940s. After Oxford Dairy was sold, he joined Farmer’s Dairy and continued his work in the milk business. He was likely best known to many in Halifax from his days of running the Irving station on the corner of Windsor and Almon in the 60s, 70s and 80s. He was a hardworking and friendly soul, who would always offer help or money to anyone in need. He felt very fortunate to be part of the taxi community in Halifax and was often willing to stay late to get a car back on the road. He would simply explain, “they needed their cars to make a living”. As a testament to their appreciation, many of the drivers continued as friends, and would often drop by to see him. As his health declined in recent years, it became evident as people shared stories of Bas’s generosity, that he had a hard time turning his back on anyone struggling. He maintained a good sense of humour and a kind heart, despite his failing health, through his final days. He will be missed by many. We would like to send a special thank you to everyone who took the time to visit with Bas as he became more reliant on visitors at Rosedale Ave. He was always eager to share a coffee and donut, recount stories of a recent NHL hockey game, or speak of his own days playing for the Windsor Maple Leafs and the Oxford School hockey teams. Bas was a good athlete, but on many occasions would proudly recount that his brother Cecil was the best hockey player he had known.

Arrangements are under the care of J. Albert Walker Funeral Home (2005) Ltd. 149 Herring Cove Rd. where visitation will be held from 6-8pm Wednesday June 26. A funeral service will be held on Thursday June 27 at 10:30 am from St. Benedict’s Roman Catholic Church 45 Radcliffe Dr. reception to follow. Interment to take place in Gate Of Heaven Cemetery Lower Sackville.

Reception to follow in the church hall after service.