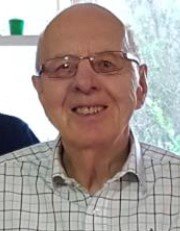 Age 84, passed away in Arborstone Enhanced Care Nursing Home Halifax on Friday, January 1 2021. Born and raised in Spryfield, he was the son of the late William P. and Winnifred A. (Jarrett) Yeadon.

Bill was retired from The Province of Nova Scotia – Department of Transportation and Public Works. From an early age he had a strong entrepreneurial sense and was a natural salesman in his many business ventures. Bill enjoyed being a people person and was a volunteer coach for Herring Cove Minor Hockey, where he and his sons braved many cold, early mornings at the rink.

Funeral arrangements are trusted to J. Albert Walker Funeral Home (2005) Ltd. Following COViD-19 protocol, no visitation will take place. A Funeral Mass of Christian Burial will be celebrated on January 7, 2021 at 10:00 a.m., in St. Michael’s Catholic Church. A maximum of 65 people may attend. Everyone must register to attend before January 7, at www.stellamarishalifax.com and follow the online directive. Interment to follow (family only) at Gate of Heaven Cemetery, Lower Sackville. Email condolences to barryyeadon@live.ca or visit Bill’s Tribute wall at www.walkerfh.com. Donations in Bill’s memory may be made to the Heart and Stroke Foundation or a charity of your choice.

Share Your Memory of
William
Upload Your Memory View All Memories
Be the first to upload a memory!
Share A Memory