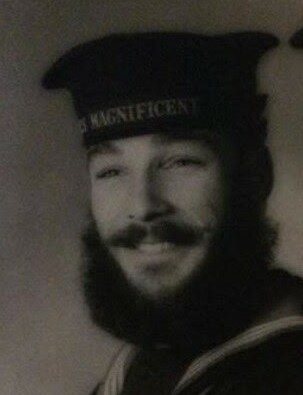 Age 89, of Halifax, passed away in his sleep, May 31st in the Halifax Infirmary. Colin was born in Groves Point, Boularderie Island, Cape Breton. He was the 6th child of the late John Collins and Denise (Joiret) McKinnon.

Colin left home at a young age to join the Royal Canadian Navy, which was a career lasting 27 years. He was an Aero Engine Tech and served on the aircraft carriers HMCS Bonaventure and HMCS Magnificent with the rank of Sergeant. After a brief break, he went back to work at the Dockyard as a stores-man for another 12 years. He continued to attend the CNAG monthly meetings in Shearwater   He was also a member and treasurer for many years at the Fairview Cribbage League. His other hobbies were bowling, fixing anything, like washers, dryers, plumbing, heavy equipment, and carving, reading his newspaper and doing all the puzzles. All of his nieces and nephews fondly remember him. "He would always have peanuts for me to eat and give us toonies" We're sure he will be remembered by many at the mall as "the man with the beard giving toonies to all the children"

He is survived by his sons, Richard (Vera Lynn) and Nathan and his close friend Anna Murray, all of Halifax, grandson, Kyle and granddaughter Brenda and great grandchildren, Jacob and Rebecca. Colin is survived by sisters, Denise Young (Ambrose) of Ontario, and Colleen Blom (Robert) of Halifax, and brother, Gilbert (Grub) in California.  He was predeceased by his loving wife of 51 years, Joanne (Bennett). sisters, Elizabeth Gamble (Victor) and Ella Mae Cameron (Martin), and by brothers. John Byron (Romaine) James Edward (Marlene), Joseph (Janet), George (Anne), and Paul (Verna).

Arrangements and Cremation have been entrusted to J. Albert Walker Funeral Home (2005) Ltd.,149 Herring Cove Road, Halifax, B3P 1K6.  In keeping with Colins wishes there will be no visitation.  A funeral service will be held on Wednesday June 8, 2022 at 11 A.M. in the funeral home chapel.  An interment will be held at St. Phillips Anglican Cemetery following the funeral service.

The family would like to thank the staff of VON Canada, Bay Shore Health Care and Paramed for all the home treatment the past few years. Also, a special thanks to the staff of the Halifax Infirmary in units 8.3 and 8.4 for their care in the past few months.  Because of Colin's love of animals and birds, in lieu of flowers, donations may be made to Hope for Wildlife - or a charity of your choice. Online condolences www.walkerfh.com